News and Reports from Prehistoric Group

This page will display summaries of pages with news or information about the above group. If it is blank then no such pages have yet been added by the Group.

A third season of excavation in Charlwood took place in March 2017. In an attempt to define the area of research interest six trenches were opened across the field from west to east. (See illustration of site layout). Five of these trenches revealed some archaeological evidence, confirming the existence of parallel ditches which can be followed for c.40m east to west on what is essentially the brow of the hill, and appear to define a southern boundary.

In 2016 a large magnetic anomaly was investigated during the Charlwood excavations and the linear feature partially revealed was tentatively interpreted as a charcoal burning clamp (Bull 457). Charcoal retrieved from this feature was subsequently sent for radiocarbon dating which has resulted in a date between AD1455-1645.

Some limited local history research into Charlwood during these dates has allowed this feature to be provisionally set in context. 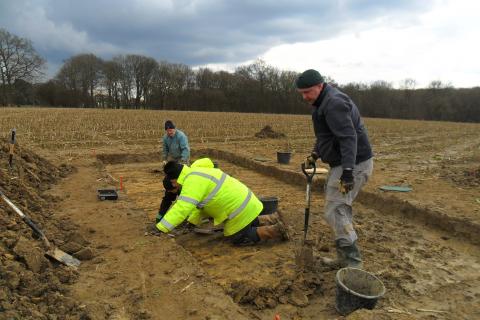 In March 2016 further excavation took place in Charlwood. A trench (T3) was located across a magnetometry anomaly which appeared to be associated with the 'burnt bone' ditch revealed in 2014 (Bull 449). It had been decided that the 2014 feature needed some clarification to determine what the ditch might be related to, having been dated by both pottery analysis and C14 dating to the transition period of the Late Iron Age and early Roman Britain.

In 2012 David Williams reported in Bulletin 431 on a Late Iron Age and Early Roman site at Charlwood where a group of coins and other objects had been found by members of the Weald and Downland metal detector club. A magnetometry survey in May 2011 confirmed the possibility of buried archaeological features.

Early in 2010 English Heritage approached  Surrey Archaeological Society. They had been asked to assess the Abinger Pit Dwelling museum, owned by Cherry Clarke, as the passage of time had left the premises in a state of disrepair. For those of you not familiar with the site it was discovered in 1948 and excavated in 1950 under the direction of L S B Leakey, who was staying in the area. Owned by Major E Beddington-Behrens, living in Abinger Manor, it was regarded of importance and a museum was established, in the field, by the erection of an agricultural build